Onshore UK Contracts for Difference: the route to and competitiveness for AR4 Pot 1

By Giles Dearden, director of due diligence

It is pleasing to see that the government launched the Contracts for Difference (Cfd) Allocation Round (AR) 4 portal on 9 April and follow up masterclasses run by the Low Carbon Contracts Company (LCCC). Including mature onshore projects in the CfD rounds has been long awaited, and it is worth looking back to see how we have progressed.

Some six years ago, the UK government announced its first CfD Allocation Round 1 (AR1) winners: Pot 1 onshore wind was awarded across 15 sites and circa 750 MWs at prices in the high £70s and low £80s/MWh. Solar bids were under 75 MW of projects at £79/MWh (and an outlier at £50 that didn’t complete its contract). All very good at the time, and the industry looked forward to further auctions and a steady stream of further tenders and contracted MWs into the next decade. But the May 2015 election put a Conservative majority into Westminster, and onshore renewables were deemed too controversial in an effort to appease Tory backbenchers.

The onshore industry reverted to chasing Renewables Obligation Certificates (ROCs) to its 2017 end. Thereafter, the cliff edge of new build was sharp and in 2020 was less than 150MW. 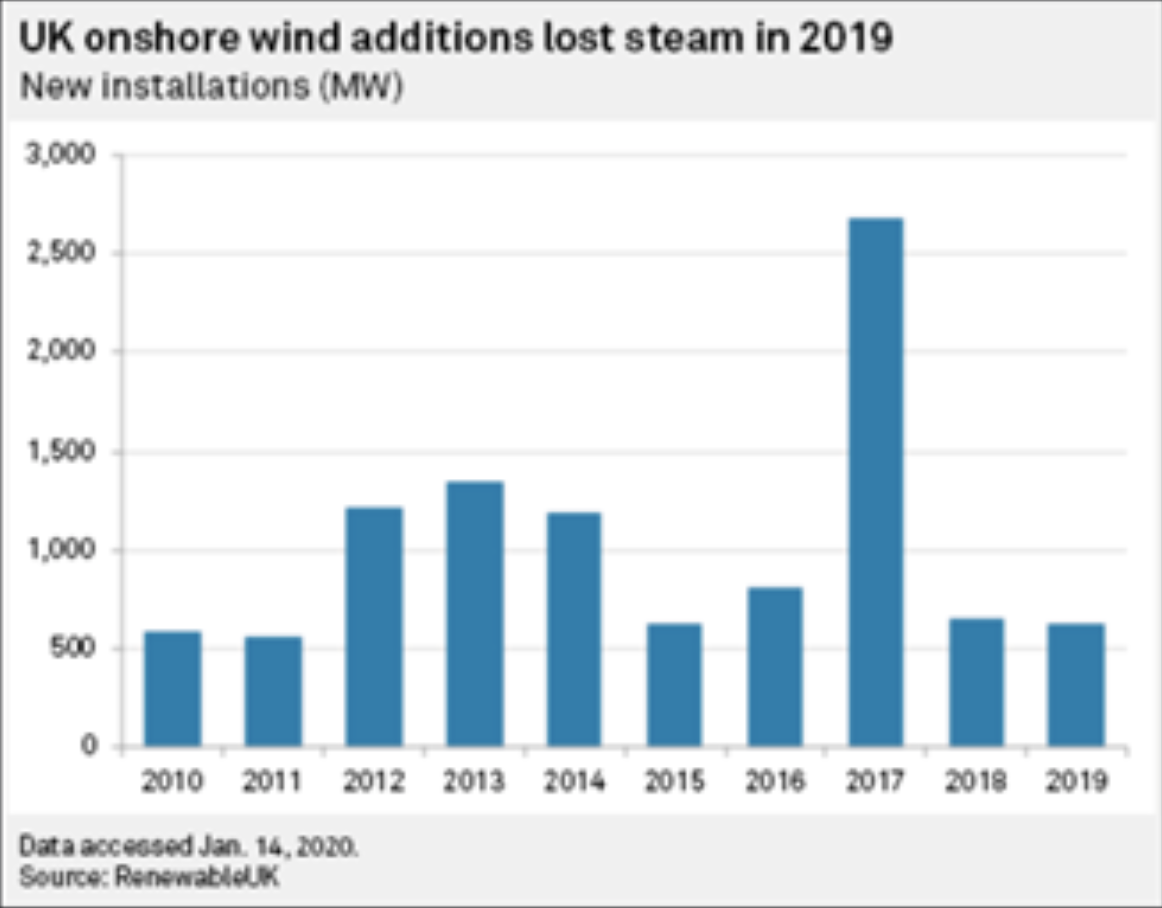 Later in 2016/17 Natural Power was commissioned, along with Baringa, to analyse the levelised cost of energy (LCOE) and competitiveness of all UK onshore wind projects. At that time, around 9.6 GW and 364 sites were in planning or consent stage, with grid dates that would make them ineligible for the ROC. We modelled and applied site-specific capacity factors using detailed wind maps and best fit turbine scenarios; grid distance and charging zone logistics; and CAPEX and OPEX budgets to arrive at a competitive LCOE across each project in the portfolio. Across all wind sites the average project size was 26.5 MW, and the weighted average tip height and rotor diameter was 125m and under 80m respectively.

In respect of an assumed (and hoped for) second Pot 1 CfD auction in 2018/19, the total project volumes potentially entering a second auction (with a permit) was just under 5 GW across onshore wind and solar PV. A £49/MWh clearing price bar was set as a strong political message to continue onshore CfD support, and circa 1 GW would have achieved or were below this bar. 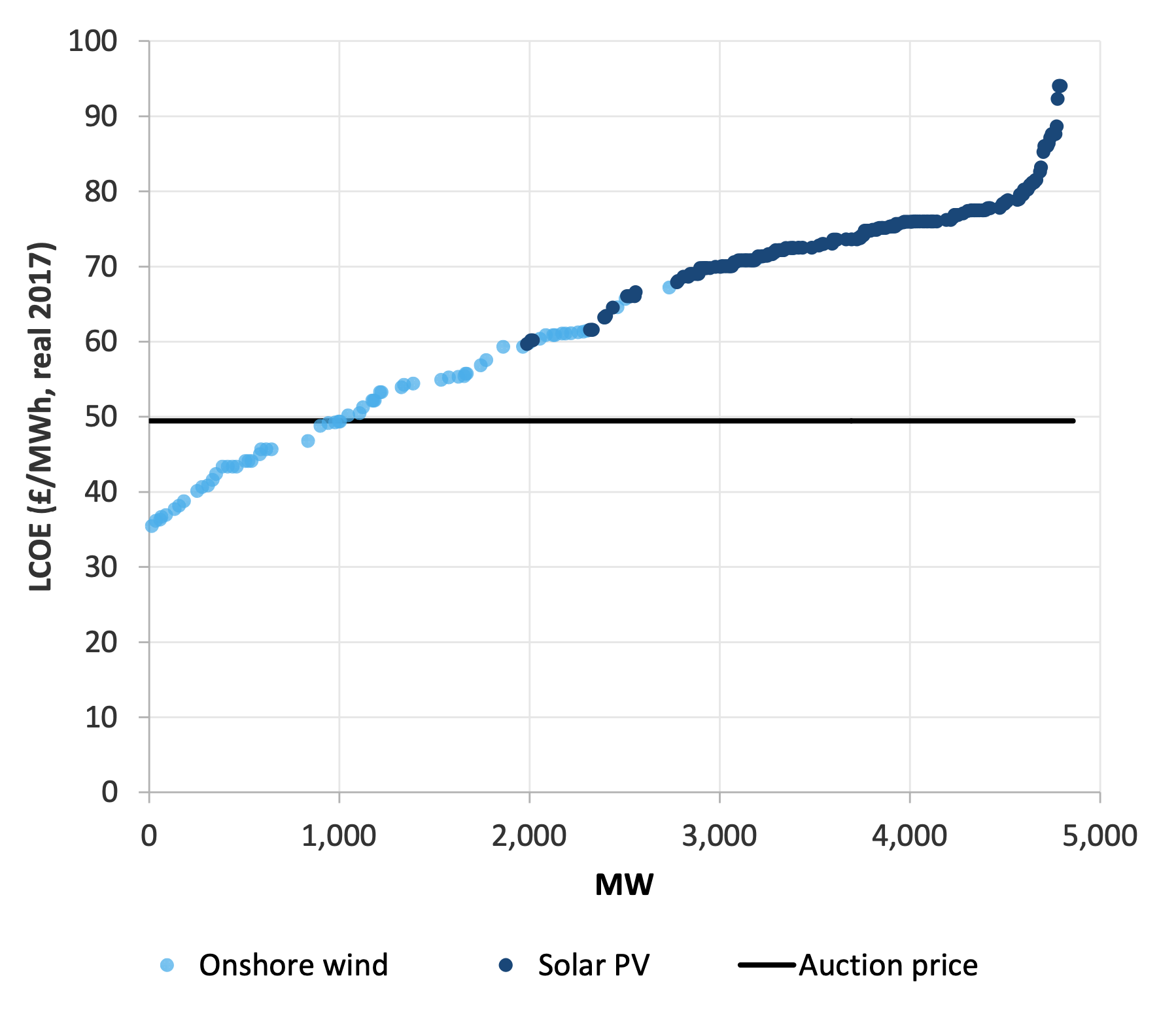 Interestingly, an increase of the capacity target to 2 GW would have resulted in a clearing price of ~£60/MWh, still much lower than the AR1 auction, and with solar just making an appearance.

Nevertheless, the political message fell on barren ground. Later years saw further global expansion of wind and solar with LCOE dropping significantly due to competitive auctions and a number of factors including:

The steep decline of solar’s cost due to scale, technology innovation and manufacturing experience. It’s a 28% price drop every time scale doubles.

The solar cost gap between mono and bifacial modules is closing. In the UK it can produce between 5-10% of additional power. If conditions are optimised and single axis trackers adopted, the additional power can be even higher.

Technology drivers for solar have been larger sites and capacity factors. For wind, the drivers have been 4+MW turbines with larger rotors and higher hub heights.

Both technologies have benefited from more efficient control and operational efficiency (sensors, smart data, etc) to maximise production and efficiency, and reduce costs, which has led to efficiency at a point of grid parity/LCOE price zone.

UK CfD auctions predominantly continued for offshore wind, with the latest AR3 representing the lowest price achieved to date at a £39.65/MWh strike price. The UK onshore wind and solar pipeline has kept going, with a number of corporate PPAs, some island wind CfD (this CfD pot allowed onshore wind to bid from Scottish islands) and a few merchant build outs. The industry has been waiting to be included in AR4 since its announcement a year ago as an important route to market for new projects.

In Q1 2021, Natural Power’s Project Tracker identified circa 3 GW to 3.5 GW each of onshore wind and solar consented and eligible to bid into AR4. Albeit some may not enter the auction due to other route to market choices and/or incompatible grid export dates. Furthermore, circa 5 GW wind and 3 GW solar are in the planning stage, many of which will be pushing for permits and signing grid connections that allow build out schedules all by the bid timescale at the end of 2021. This latter portion of sites is largely better optimised (bigger WTGs, larger solar sites, etc) than those consented at the moment, so tracking their permitting progress up to the bid date will be key. This significant backlog of onshore projects is setting a potentially more competitive agenda than seen in previous auction rounds.

If we look at all onshore wind projects, and compared to the 2017 analysis above, the weighted average tip height is now around 155m and project size doubles to an average of over 50 MW. Present solar project size averages at 25 MWs, but the spread is larger than wind. We see a significant number of solar sites in the 40 MW to 50 MW size bracket, and a handful of 100 MW+ projects have made a lot of headlines.

So, not only are volumes leading to a projected highly competitive outcome, but project optimisations are likely to lead to lower strike prices. Our analysis of LCOE shows the best wind sites having an edge on solar, but neither technology now has a clear advantage over the other. And where will the pricing end up? Certainly back in 2017. Wind could, theoretically, get to the mid £30s/MWh and solar at low £60s/MWhr. LCOE in 2021 could, in our view, get into the £20s/MWhr for the best wind and solar sites, but tracking the upper limit is highly variable due to Pot 1’s size and final eligible project unknowns. Furthermore, grid charging and uncertainty/volatility are going to play a large role in final bid pricing for (predominantly wind) projects in Scotland.

Natural Power will be updating and refining its Project Tracker and LCOE model for AR4 over the next two quarters, and we keenly await guidance from the Department for Business, Energy and Industrial Strategy (BEIS) on the Pot 1 GW size allocation and intended build out end dates.

If you would like to know more about Natural Power’s auction modelling and advisory services, please contact either me (Giles Dearden) or Hannah Staab.