Ireland’s first competitive auction for renewable energy capacity took place this summer. The results spell sunny times ahead for the nascent solar industry in Ireland and mark an important step towards the country’s target to meet 70% of its electricity supply from renewables by 2030.

According to provisional results issued by electricity market operator EirGrid, 63 solar farms totaling 796 MW and 19 wind farms totaling 479 MW were successful in the RESS-1 auction, with an average bid price of EUR 74.08/MWh.

Figure 1 shows this pricing alongside recent auction results in the wider European market. Unlike most renewables subsidy schemes in Europe, the RESS-1 prices are not index linked, which according to our industry contacts added EUR 10-12/MWh to bid prices. Grid costs in Ireland also tend to be higher than in other European markets. 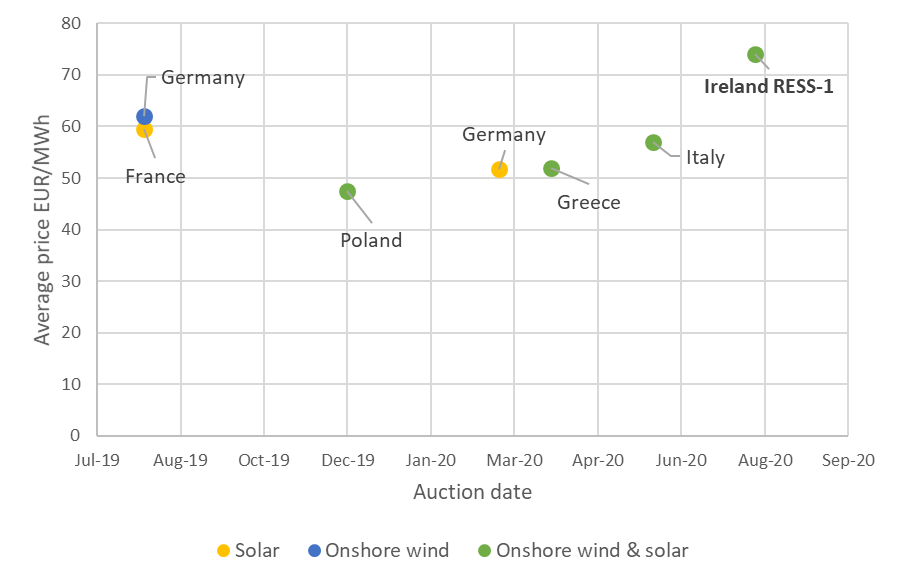 The move to a competitive auction scheme is good news for the consumer – RESS-1 prices showed a significant step down from the previous REFIT subsidy scheme, which was only available to onshore wind farms at a tariff of EUR 80.25/MWh in 2019.

While a separate auction is expected to take place for offshore wind projects in 2021/2022, RESS-1 marks the first time that onshore wind and solar have gone head to head in the Irish market – and results may be surprising at first glance. Ireland sees among the highest wind speeds in Europe, and generally has a reputation as a cloudy and rainy country (see Figure 2 & 3 for wind and solar resource maps). With no history of large-scale solar deployment in Ireland, developers and investors also faced a steep learning curve around the solar supply chain, contracting strategy, and design optimisation.

The auction was designed with a separate pot ring-fenced for solar projects (up to 300 GWh or approx. 300 MW), with the remaining solar projects competing against wind farms in a general pot. When the auction design was first announced, expectations were that solar farms would struggle to match wind farm bid prices and effectively be limited to the ringfenced pot.

The outcome was solar projects were able to hold their own in the general pot, and secure around 467 GWh additional capacity. This is partially due to some large wind projects opting not to participate in the auction but is also testament to rapidly declining solar Capex and advances in module technology.

UK developers and investors in particular will be taking note of these results, as the upcoming CFD AR4 auction (planned for 2021 in the UK) is expected to have a similar technology-neutral design. 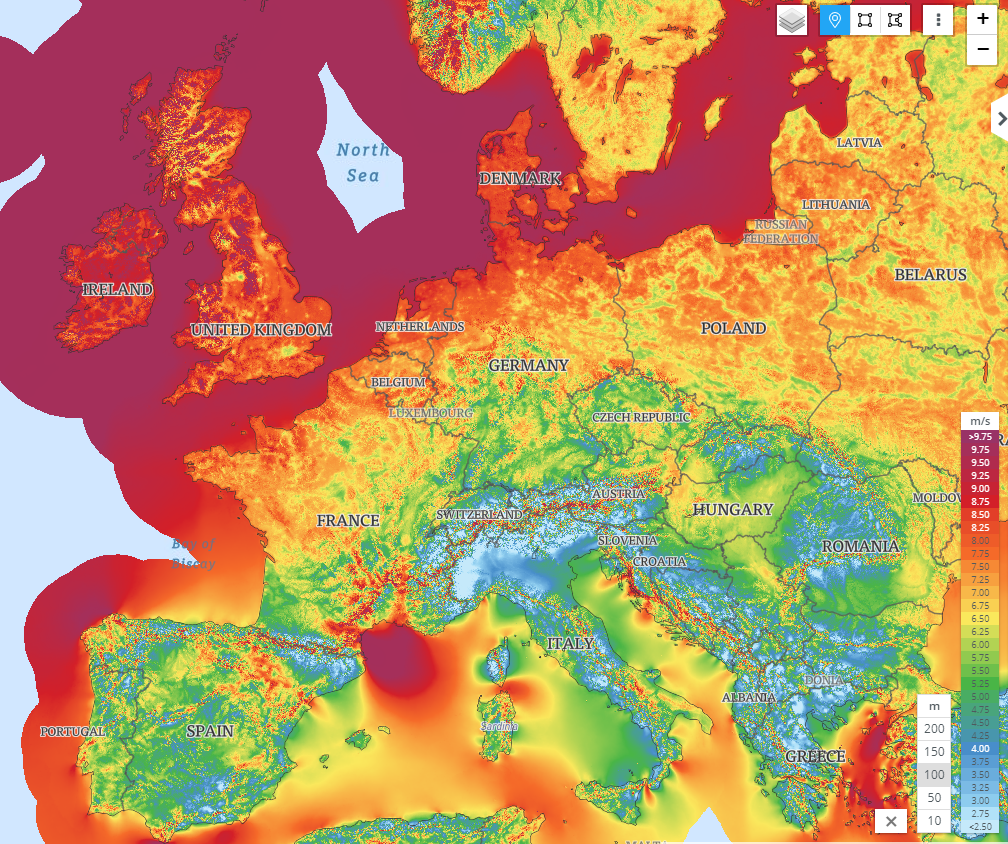 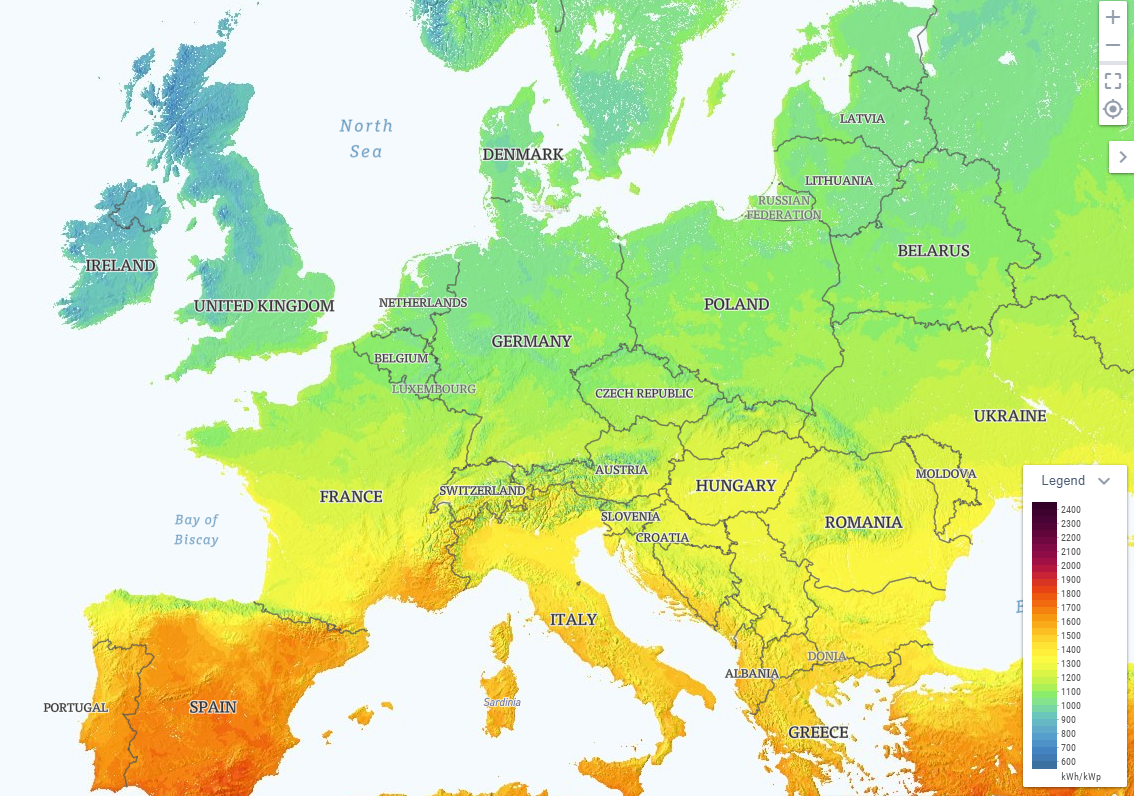 At Natural Power, we worked with a range of developers and investors ahead of the RESS-1 auction to evaluate the competitiveness of projects and pipelines, and maximise the chances of auction success. Our internal database of eligible projects and cost benchmarks allowed us to compile an LCOE-based project ranking and help prospective bidders understand where their sites might fall in the merit order.

Grid costs are a significant contributor to overall Levelised Cost of Energy (LCOE) for both wind and solar projects and it is crucial to understand where specific upgrades to grid infrastructure may render individual projects unviable. Understanding grid constraint and curtailment risk on a relatively small island grid network with limited interconnection is critical, as well as transmission/distribution loss adjustment factors and use of system charges is also key, as these can vary significantly between projects.

Other Capex is largely driven by technology selection and project size. As expected, larger wind and solar sites were among the list of successful RESS-1 projects, as economies of scale can be achieved. Nevertheless, a notable number of smaller-scale solar farms (in the 4-10 MW range) were able to secure contracts.

For wind projects, the ability to deploy larger, taller turbines and boost yield by accessing higher wind speeds is a key factor in auction competitiveness. However, for future auctions in Ireland, tip heights and rotor diameters are likely to hit a ceiling and be constrained by the long-awaited Wind Energy Guidelines relative to other European markets, where tip heights over 200m are becoming increasingly common.

For solar projects, many successful bidders focused on the use of cutting-edge bifacial module technology (which can generate power from the rear as well as the front side) and aggressive overbuilding of DC capacity with respect to grid export limits. This allows savings to be made on electrical balance of plant, while sacrificing a small proportion of the solar farm’s peak output to clipping effects.

Figure 4 provides an overview of the successful projects in RESS-1. 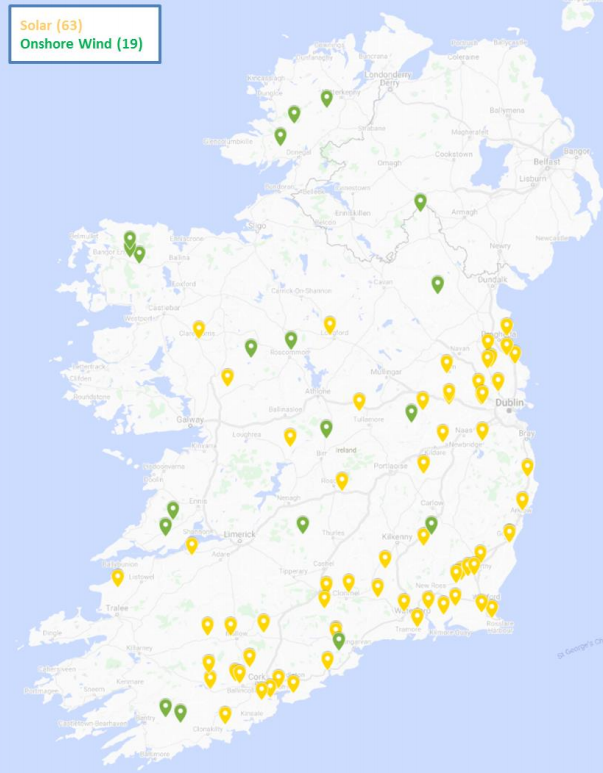 What’s next for the Irish renewables industry?

Successful bidders will be looking to kickstart detailed design and procurement, as projects will need to be fully operational by December 2022 or face a reduced PPA term in a force majeure event or losing the auction support completely. This could prove challenging for 110kV connected projects in particular, and owners will be seeking to make second stage payments as soon as possible to start the capital approval process with ESB Networks and Eirgrid. This will in turn trigger commencement of design review and procurement by ESB Networks and Eirgrid, which will be the critical path to achieving energisation and Commercial Operations Date (COD) for the most, if not all, of the RESS-1 projects.

Competition from solar EPC contractors will likely be fierce, and Natural Power is are aware of several large European EPCs looking to claim a share of Ireland’s new solar market. It remains to be seen whether the extremely competitive provisional prices quoted by EPCs can be realised in all cases.

The penalty for not taking up a RESS-1 offer is not overly punitive at EUR 2/kW, so some owners may decide that their winning bid is too low to successfully build out and finance a project and choose to exit RESS-1 and try to achieve a higher price in the next auction round.

Interestingly, the volume of wind projects bidding into RESS-1 amounted to approximately half of the volume anticipated by the regulator (CRU). It appears that owners of some large, competitive wind projects chose to hold back from the first auction round. The RESS-2 auction is expected to take place in 2021 and we will likely see a combination of projects participate, including:

Projects that were eligible for RESS-1 but chose not to participate;

Successful RESS-1 projects that choose to decline their offer and hope for higher offers in RESS-2; and

With grid constraints and curtailment issues already plaguing the current fleet, there is substantial potential for battery storage and other flexibility providers to enable Ireland to meet its ambitious decarbonisation targets. To date, 110 MW of standalone battery storage projects have been procured through the DS3 auction scheme. Over the coming years, we may see a rise in hybrid projects looking to avoid costly grid upgrades, optimise the use of connection capacity and maximise revenues.

And for developers looking to avoid competitive auctions, corporate PPAs such as the recently announced deal between Facebook and Brookfield Renewable Partners continue to offer an alternative route to market.

The 2019 Climate Action Plan clearly outlined the ambition for renewables to achieve 70% renewable by 2030, targeting at least 1.5GW solar, 8.2GW onshore wind and 3.5GW offshore wind. This ambition was further extended in the recently agreed Programme for Government, of which the Green Party is a key part, with the offshore target increased to 5GW and a commitment to developing a solar energy strategy to ensure a greater share of electricity is met with solar power.

One thing is for sure, with this level of support and ambition, there is no sign of renewables running out of steam in Ireland any time soon!

This article was originally published in issue 37 of Power and Energy Solutions (PES) on 5 October 2020.