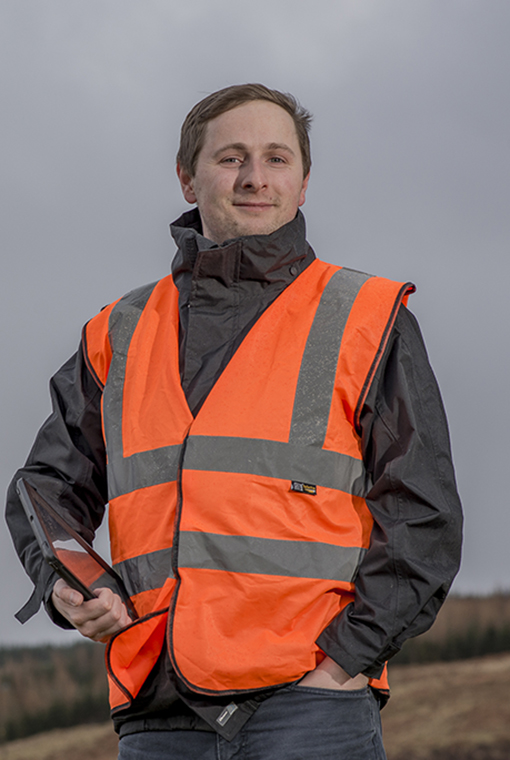 What does your role entail?

My role is about the marriage of land rights with planning and permitting for renewables projects. I look at planning considerations, review planning applications and assess the need for an environmental impact assessment (EIA) assessment report. This is standard form whether you are starting to develop a wind farm from scratch and you would have to submit a planning application, or whether you are considering the next steps in a wind farm’s life, such as repowering or decommissioning. I also get involved in the property side.

One of the complications is that a lot of the sites that are close to repowering or life extension would have been consented 20 years ago, and what was submitted then would not be accepted today. One of the most common issues we see is having to extend the crane pads: the ones used 15 years ago could be considered as too small now. When you go for life extension, you’re having to consent another 50% larger crane pad or so, so that when you’re replacing things like the gearboxes, there’s the ability to do that. It’s not as simple as adding 10 years on to its life. It’s assessing if the asset is still fit for purpose and that you can do blade and gearbox replacements moving forward.

Behind all these wind farms there are lease agreements with the landowners. When an asset reaches the end of its predicted life, they must be extended to permit life extension. There’s a level of negotiation that goes into extending a lease agreement to allow you to submit the application to extend [the wind farm] but also the rights to continue to operate the wind farm. I mostly get involved with looking at the land deals and how they’re set up and what rights and obligations the wind farm has to allow for a life extension. There may be consideration for the rental level during the later extension period or for decommissioning bonds, where the landowner is assured that there’s enough money in the budget for decommissioning to allow the wind farm to be dismantled and the land restored to its previous condition.

My job is about forming good relationships, and a level of trust is built up over time. When considering a repowering or life extension situations, if the relationships are strained, it will make it harder to extend the site for another 10 years or repowering for 35 years. There’s no guarantee that you’ll get a repowering consent for a brand new wind farm over a life extension, so you have to be completely honest and open with all stakeholders about what you’re hoping to achieve.

What does your day typically consist of?

I fire up the laptop and review emails that have come in from the day before and set out what sort of tasks I’ll prioritise. I may have a few calls with landowner’s agents or developers, so I’ll spend my day going between clients and the development team and making sure everything is connected up. For example, has site access been arranged? Has notice been given to the landowner for turning up? Is the layout of the wind farm correct as per what the landowner is wishing to see? All of these things need to be well managed to ensure the relationship between the developments and landowner is healthy. I get involved in lease plans and may need some negotiation of property agreements. It’s a lot of dealing with middlemen. I also speak with other land agents in the team and see what they are up to for the next few days.

Generally, a developer comes with a site and says, “this is where we fancy putting a wind farm”. Then the land team will do some land referencing, and that’s working out who owns the land. We’ll then start trying to make contact through letters, door knocking or telephone calls. Once we know who owns [the land] and we’ve spoken to them and they’re keen for a wind farm, we’ll introduce them to the exclusivity agreement. This says the wind farm developer has an exclusive right to progress with a development on this site and they have the access to do necessary surveys. This usually goes on for 12 months. During this time you negotiate a heads of terms that outlines the fundamental commercial and practical terms in the options lease document. It takes you through which rights and obligations you have, such as planting trees or habitat management, and rental payments. Then you can go into things like insurances and public liability or record of conditions. Once that’s agreed it goes to the solicitor and they create the full Option Lease, and that goes back and forth through various drafts before being agreed. A typical Option would last for 5–10 years, and that’s when the planning application begins. The development phase takes place knowing the property side is secured. I work with the landowner and developer throughout that whole process.

When looking at repowering projects, one of the big issues is larger blades, as there’s likely a lot more work to upgrade the public roads to transport them to site. Twenty years ago, you may have had a handful of landowners with roads containing tight corners to get to a site, so it wasn’t too complicated. These days, some sites have 30+ corners with owners that need to sign up. That can take almost more time, if not longer, than signing up the landowners on the site where the turbines will be located. I spend a lot of my time doing that land referencing, exclusivities and options taken up with the third-party access landowners.

A good example was one recent job in Wales. It was an extension of a wind farm, and they’ve opted for tip height increase to make it better financially with no subsidy. A route that they’ve used for two other wind farms next door just isn’t suitable, so we’ve had to agree a cross country bypass with other landowners to bypass the pinch point in the local road network. Generally, there is a solution to pinch points, but it’s about working out what’s most sensible for the wind farm and then going out to get the land signed up.

What do you enjoy most about your role?

I enjoy the marrying of the physical world, such as road corners and swept path analysis, and dealing with people and how you communicate that. Most landowners are happy to get involved with wind farm development, as they would have seen the blades going by their door and seen the wind farms being built. They want a slice of that action; we may be able to give that to them. They see that renewables are here to stay and the need for it, and that’s always positive. You play on the narrative that this is good for them, the environment and the economy.

How did you get into the role in the first place?

I have a degree in geography and a master’s in land economy, which is rural surveying, from the University of Aberdeen. I have always enjoyed geography, which is effectively what we do here. I did my rural surveying, and I always thought I would be a more traditional surveyor, looking at farms and estates, but I didn’t have a formal rural background. That made it difficult because I didn’t have that inert farming knowledge. So, when this job came up over 10 years ago, I had finished my dissertation on the effects of wind turbines on grouse, so thought I would give it a go. A lot of people didn’t have years of renewables experience at that point, so it wasn’t a barrier that I didn’t come from renewables. I applied for the job and started as an assistant land agent. Over the years, I’ve worked my way up to principal land agent.

What is the most interesting project you have worked on and why?

It would be a community project I did for Carsphairn community council. This was looking at installing either residential batteries at individual homes and being able to amalgamate them up into a larger battery offering or installing a single large battery in the village. It was between installing 100 4–5 kw batteries or installing a 500 kw battery in town. Local Energy Scotland funded it, and the client was a community council. [The community council] were people who had given up their free time to come along and see if this was something the village could benefit from. The idea was that they were going to use part of their wind farm community benefit fund to purchase the battery. They get blackouts in their village, so they wanted the batteries to make revenue and give them more grid security. It was a different client and scale than what I generally get involved in at Natural Power. We look at megawatts scale projects; this was kilowatts.

It was a feasibility project, but sadly it didn’t come to anything as the cost of the batteries at that time were prohibitive. Hopefully, in the coming years, we may be able to revisit the project because battery prices are coming down, but I think it will be more likely that people will connect their electrical vehicles into their house, and that will be the battery. People will have their 50–60 kw battery outside their house, and it will provide the secure electricity they need.

What is your biggest achievement at work?

I passed my Royal Institution of Chartered Surveys (RICS) exams, and that means I can put MRICS on the end of my name. Getting that formal recognition has helped with my career, as a lot of the agents I speak with are chartered surveyors as well. There’s a lot of ethics and competence that goes with being chartered. Having an understanding of competencies and ethics shows an industry competency that clients appreciate. The people we look to bring into the land team are either working towards or are chartered surveyors as well.